For this year’s Iowa City Book Festival the IYWP arranged an outstanding workshop with Dina Nayeri for local high school students. Nayeri is an MFA graduate of the Iowa Writer’s Workshop and this year’s recipient of the Paul Engle prize which was presented to her by the Iowa City UNESCO City of Literature organization.

The Paul Engle prize is awarded to individuals who, like Engle, “represent a pioneering spirit in the world of literature through writing.” Nayeri’s work deals closely with refugee identities and challenges, an issue that is more important than ever. On October 3rd, students gathered at the Iowa City Public Library to meet and work with Nayeri and explore political and refugee identities much like Nayeri does in her work.

We interviewed Madeleine Roberts-Ganim, a high school student, IYWP intern, and participant of Nayeri’s workshop to get a sense of what it was like to work with critically-acclaimed author Dina Nayeri. 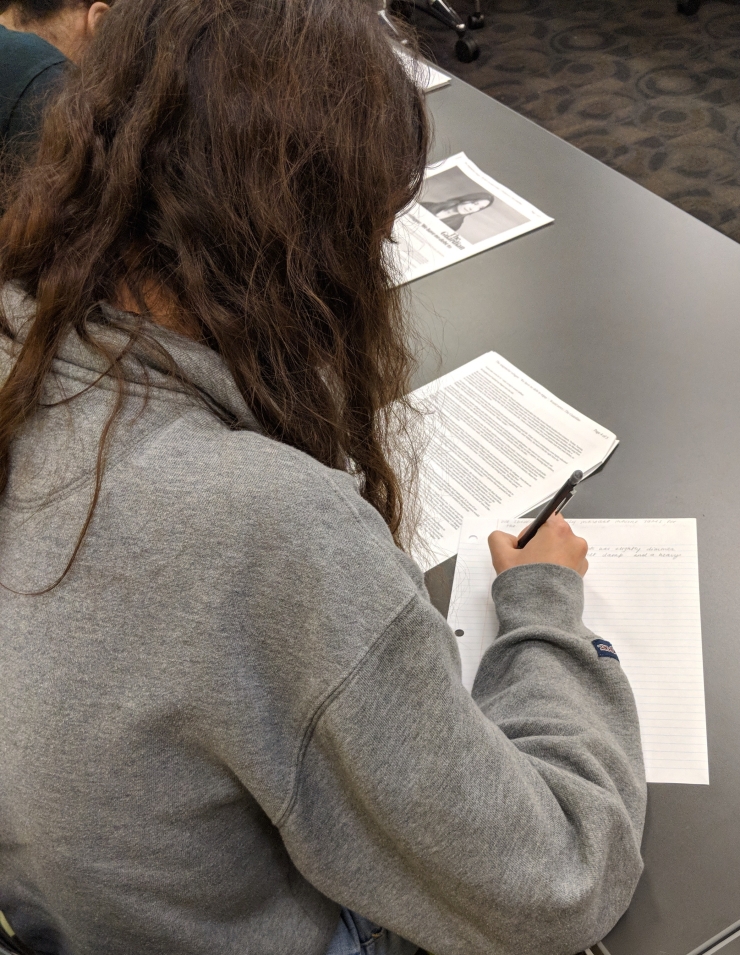 Q: What was your biggest takeaway from Nayeri’s workshop?

Madeleine Roberts-Ganim: I learned the value of using personal stories in order to persuade readers. Dina Nayeri really focused on the importance of humanizing people and their struggles. When making the argument that immigrants and refugees need to be helped instead of shunned, it can be easy for some readers to disregard this claim because the people in question just seem distant. But, if you tell stories about these people that reveals how human they are, readers are more likely to empathize with their situation and be persuaded to help their cause. This can be applied to so many different scenarios, and the use of personal stories when trying to get an argument across is so important in humanizing people who otherwise may be perceived as inhuman.

MRG: It was amazing! I am so grateful for the opportunity to learn from such an incredible writer, teacher, and person. I never would have been able to gain this new perspective or hear from such a critically-acclaimed writer without this workshop.

Q: What impacted you most during your time with Nayeri?

MRG: Dina talked about her own experiences as a refugee first in England and then the United States. I was shocked by the stories of cruelty that she endured when coming to these new places. In London, some boys at her school picked on her horribly and even slammed her pinky in a door so part of her finger became detached. In the U.S., kids would constantly make fun of her accent and say racist things to her. Obviously, her experiences were incredibly disturbing and difficult, but it was incredibly impactful to see how she overcame them and remained resilient even in the face of this hardship, going on to be so successful. 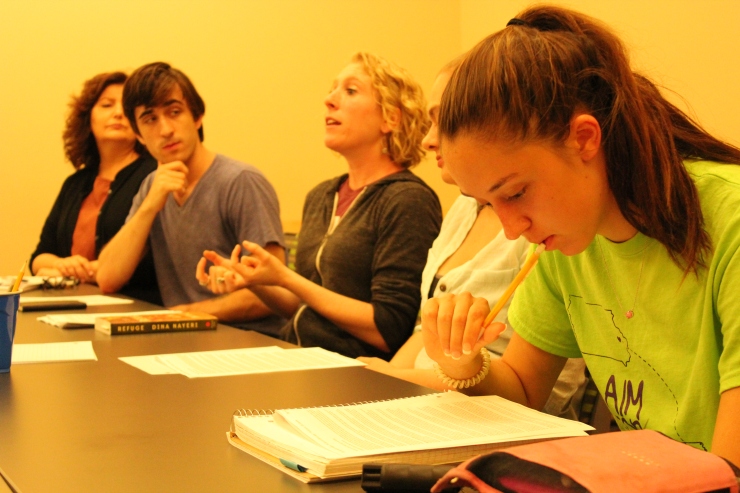 Q: What did students discuss and work on throughout the workshop?

MRG: We discussed Dina’s two novels, her graduate work at Harvard, and her experience at the Iowa Writer’s Workshop right here in Iowa City. Dina had us read excerpts from her essay, “The Ungrateful Refugee.” We discussed techniques she used to persuade her audience, like starting out with personal stories and then moving into political arguments to ease readers into being more likely to believe her perspective. Starting with the political would be too abrupt and would turn people off because it would feel attacking and cause readers to be defensive. Starting personal brings readers to Dina’s side, so they are more likely to support her political arguments when she eventually gets there. She then had us write a radical political statement that we believed at the top of the paper. We wrote a fictional scene that related to this statement without ever explicitly stating what it was. For example, if your statement was, “Abortion should be legal in all cases,” you might begin a scene showing the struggles of a woman with an unwanted pregnancy and her hardship in trying to get an abortion, along with the hate she receives. The goal of this exercise was to practice using humanizing and personal stories in order to introduce a political view.

Q: What advice did Dina give you and the group as young readers and writers?

MRG: She gave the advice to always argue for what you believe. She stressed the importance of not letting other people’s discouragement stop you from getting your voice out there. Especially as young people, it can be easy for older people to disregard our opinions and quell our voices. She encouraged us to use good, accurate, and passionate arguments to fight for what is right.

Q: What is something we could all learn from Dina and her experiences as a refugee?

MRG: We could all learn to empathize with people different from us. To open our minds to different points of view and getting out of our own set ways of thinking. This is so important because often times we think that we and only we are right about certain things. However, trying to see things from another perspective can help us become more kind and understanding people.